If one were to sculpt a Mount Rushmore of pivotal Texas Legends icons, Justin Dentmon would be one of the first names thrown into consideration.

Dentmon, 33, has a closet full of jerseys from around the world. However, nowhere has he collected more than in Frisco with the Legends. On Wednesday, the Illinois native –who has called the Dallas area home for years now– officially re-joined Texas for his fifth stint in Legends blue.

He was a member of the club as recently as last season, a pivotal part of the Legends team that made the postseason for the first time since 2011 and won a franchise record 29 games. Prior to that, he played six seasons overseas where he won two championships. 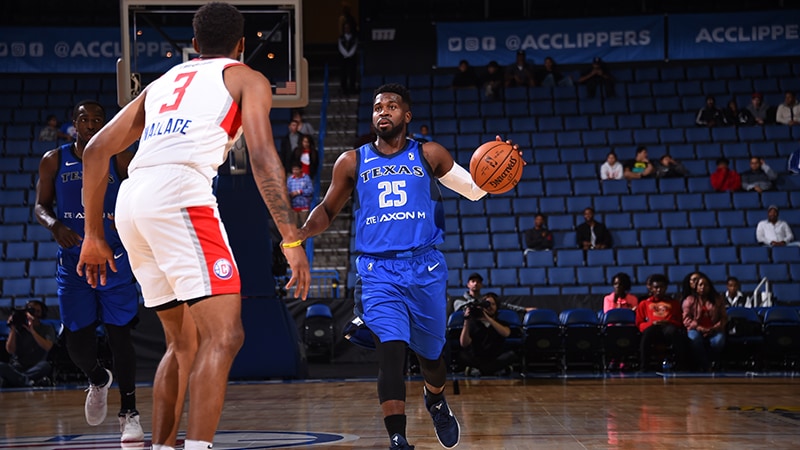 “It feels good to be back, first of all, with the team that took me in last year and let me be the leader I can be,” Dentmon said. “Now they welcomed me back after an injury that scared a lot of teams away.”

Said injury put the former San Antonio Spurs, Toronto Raptors and Dallas Mavericks player on the shelf for the first couple months of the season.

“A lot of teams are scared overseas , and the Legends are letting me come back and show everybody that I can play without this injury. I’m healthy, I’m 100 percent, I’m just really happy and excited to get back on the court.”

Dentmon played 24 games with Texas last year and was one of the driving forces for one the G League’s premiere offenses. 10 times he surpassed 30 points and scored over 40 three times, highlighted by a 48-point performance on November 29, 2017.

On 11 occasions, he hit five or more 3-pointers, notably sinking an incredible eight once and seven twice.

He calls his return to the Legends “another homecoming,” having stayed close to the team even when he wasn’t on the roster. He has attended team events over the past several months, including the open tryout in September.

“I see a lot of the fans and they welcome me like I still played for the team. Now I’m back.

“I’ve grown a relationship with the coaching staff, the front office, it’s like a family. I think that excites me the most, that I am familiar with a lot of the people here, and a coach that I enjoyed playing with last year.”

Coach Bob MacKinnon and Dentmon are a dangerous pair for the opponent, and a fireworks show for the home crowd.

“He embraced me, he let me be the player I can be and that’s more exciting than anything. I tell guys all the time when they have problems with their team and they think about going to a different team, I say make sure a team you consider is the Legends, because Coach Mac lets you be you. He’s a player’s coach.”

A vibrant personality like Dentmon brings out the best in a coach, and vise versa.

“You can have fun with him off the court. On the court, he doesn’t hold players back. He lets the chain off the caged beast, I should say. He lets a guy go out and just be him. If you’re not being you, then he looks at what he can do to make you comfortable. He’s one of my favorite coaches of all time.”

There’s little left for Dentmon to prove on the floor. Consequential eyes and ears want to see him stay on it and find his old groove.

In six trips –five with Texas– Dentmon has averaged 21.9 points in the G League. During that time, he’s been named G League MVP, Player of the Month, is a two-time All-Star and has earned three NBA Call-Ups as well as a G League Championship.

He’s a very popular face in the metroplex and will certainly light a spark at Dr Pepper Arena and with the entire organization. Fan favorites aren’t born overnight and the veteran is grateful for the love.