31-year old Brandon Fields is a global veteran in the basketball community. He’s played for 13 different teams in seven different countries over nine years, most recently suiting up as a member of the Texas Legends. Calling his basketball profile “worldly” hardly does it justice.  The below are his thoughts, in his words.

Prior to my basketball voyage that has taken me worldwide, my journey started locally. Born and raised in Arlington, Texas, I come from a mixed family. My mother is White and Indian and my father is African American.  To say that the passing of George Floyd, and ensuing protests, has struck me to my core would be an understatement.

My mom, she’s considered a White woman. My father is African American, he’s Black, so I’ve always seen both sides my whole life. It hurts…it hurts like hell when I see racism and stuff like that because I’m both sides.  But there shouldn’t be any sides. I’m part White and I’m part Black and society looks at me as a Black man. So I have dealt with racism growing up and I just never understood it because in my mind, we’re all humans.

Grasping the concept of racism always troubled me. Its an unsettling reality that children, especially Black children, are forced to realize today at an early age.

I just never really understood racism, it has never had a platform in my life for me to understand it.  Don’t get me wrong, I’ve experienced it plenty, I just haven’t understood it. My wife is White, and I talk to her family, and we talk to each other about racial issues. My wife and her family have even admitted that they were naive to a lot of things because they have never understood it, or were never in a position to understand it.

My mixed roots have now passed to a new generation in my family. It’s crazy how when I found out my son’s hair was going to be blonde and how he has blue eyes and fair skin, that I started to think to myself that I most likely won’t have to ever have a conversation with him about being targeted by police brutality. The fact that I even have to think that way when I look at my four-year-old son just shows how prominent of a problem this is today in our society.

With the coronavirus and this issue, it could be a blessing because change might actually happen because nobody has anything else to do but pay attention. People are at home right now and when you’re at home, you watch TV and you’re on your phone. So a lot more people have seen what happened to this man than normally would have seen it. If the world was ‘normal’ right now – like before the coronavirus – people would have their jobs and be too tired or, you know, we’ve all done it, would look the other way. I’m guilty of doing the same thing. I may see something like that and feel some type of way, but I have so much going on in my life that I don’t really just sit down and say enough is enough. But now, we have the opportunity.  And we need to take advantage of this opportunity to change the world.  To improve the world.

These repeated acts of brutality towards Black people have become so common in recent years that the world has become numb to it. I think that we’ve all, even Black people to an extent at times, we’ve all overlooked these injustices with people getting killed by cops all the time, because we hear about it all the time and it kind of got normal.  It shouldn’t be normal.  It should never have become normal.

This issue, like many of the issues going around the world today, can be solved by the simple understanding of right and wrong.

The George Floyd video felt like it was 10 minutes of a complete lack of common sense.  Any human should know that killing a person is wrong.

Growing up in a mixed household makes any circumstance of racism a very personal issue for me. As a child, I witnessed first-hand how something like the color of one’s skin can affect even those closest to you.  My mom’s dad was White and her mom was Indian.  All of my mom’s brothers and sisters were Black and Indian. Nobody was White and Indian except my mom. My mom had to meet her dad on the low and be sneaky because of the racial thing. So, I experienced that from a younger age and I never really understood it until I got old enough to understand and my mom explained it to me. I had these experiences at a young age because of my own grandfather, because when he was alive, I may not have been able to see him because I’m Black and Indian.

I experienced it as a young child, which is why this has always been a sensitive subject with me. I’m always willing to tell people so many sides of the equation, as far as Indian, Black, and White. Because I’m all three.

In the past, I’ve been hesitant to talk publicly about certain topics, but with a little more time off from basketball right now, I’ve taken the opportunity to become a more public, proactive voice in the community.  I never really spoke up on things like this. But these recent events has given us, and me, an opportunity.

A lot of people are fed up, and it’s given us an opportunity to speak up in a positive way. All of my athlete friends that I’ve seen posting things, it’s always been about non-violent protesting. I don’t agree with burning things down and being violent with officers, but some people do. It could be because those people are mad, they’re angry and fed up.  I understand that.

Athletes have been outspoken on social and political issues for a long time and I think our platform allows us to play a potentially powerful role in the dialogue. Solutions like “common sense” and “understanding” seem like obvious protocols, but here we are over 150 years after the Civil War and progress feels as foreign as ever.  I think it has to start with better elected officials. Holding people accountable, officials and officers, when they have constant incidents of racial profiling. Everyone is human and people make mistakes, but when you have a trend of racial issues, I feel like that should be a red flag of being a problem – and should not be tolerated.

Egregious racial injustices have affected the Black community for a long time, but I believe there is a need for change in the way not just Black people or Indian people are treated, but everyone. On both sides.  Until there is only one side.  The human side.  That includes Hispanics, or Black officers being racist to White people. It’s all of it. I think that’s a start. We all have to be willing to change. A lot of racist people aren’t willing to hear the thoughts of another Black person, or Hispanic person. They’re not willing to. But this is our world, everybody lives in this world. To come together, everybody should be willing to understand the other race. And it can’t be violent, it has to be with love and understanding.

We’re all humans. Not to bang the cliche drum, but at the end of the day, is there any bigger truth? History played out as it did and different races ended up at different spots of the hierarchy. But don’t we owe it to ourselves, and our future, to right this wrong, treat each other as equals, and at least try to start anew?

For a White family, they could say, ‘Okay, my son is George Floyd. What if a Black man was on his neck doing the same thing? How would you feel?’ That’s understanding. That’s common sense to me. If everybody uses common sense and not ego and racial profiling, it would be a way better world.  We must do better than what we have done.

We need to get to the point where there are not multiple sides to this conversation – there’s only one side.  The human side. 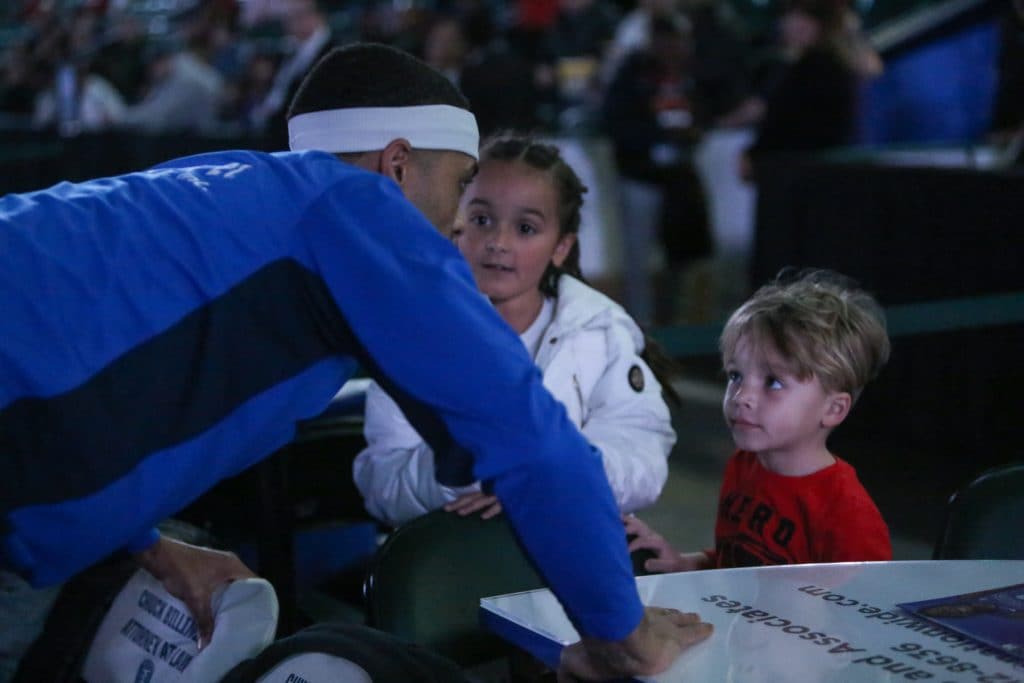