Joining together for a cause that’s bigger than Texas, 10 professional sports teams and five civic organizations throughout the state have launched the #TexasTeamUp campaign to encourage unprecedented voter turnout during the 2020 election cycle.

“The Legends want to help people become more involved in their community – and there is no greater community responsibility than everyone’s right to vote,” said Legends President and General Manager Malcolm Farmer.  “Voter registration, voter education, and then actually voting are critical components of that civic responsibility in which we believe.  This campaign is another step in furthering that mission – a mission that won’t end this November, but rather will continue in an ongoing manner.”

The campaign, which will include joint voter education and awareness efforts from each organization through marketing and social media assets, was created to encourage eligible voters to prepare for and participate in the upcoming elections. For more information on the upcoming elections, including dates, polling locations, and candidate information, go to MOVETexas.org or My.LWV.org/Texas. 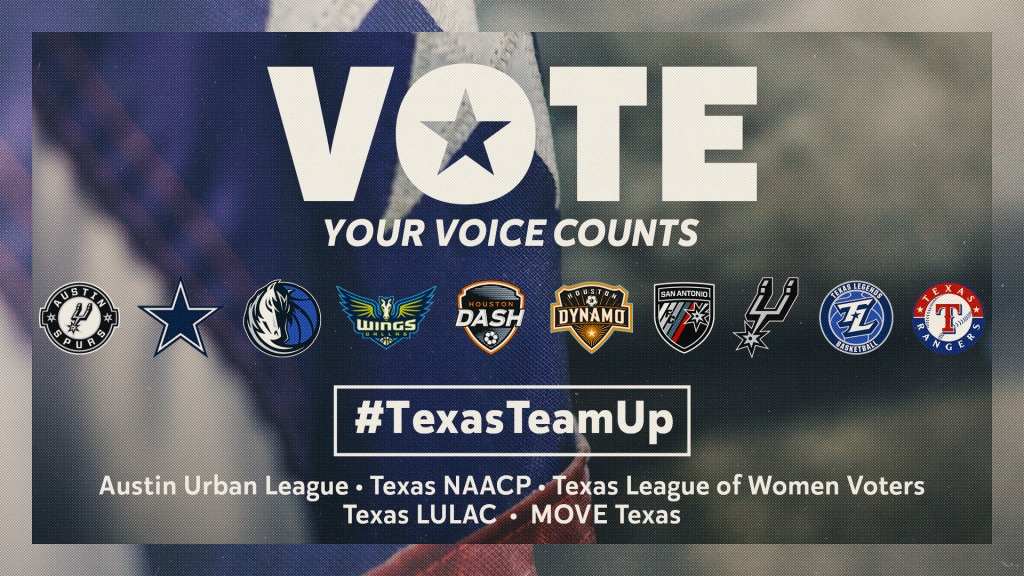 “The Texas NAACP is proud to join with Texas professional sports teams, the League of Women Voters of Texas, LULAC, the Urban League, and MOVE Texas to encourage all eligible persons to register to vote and then vote,” said Texas NAACP President Gary Bledsoe. “This partnership recognizes our common social fabric to which we are all part and how at times such as Presidential elections we are better and stronger as a nation if we all vote and have our votes counted. Tune out the noise, plan your vote, and just vote.”