One of my favorite songs is titled ‘First’ by Cold War Kids. When I talked to Texas Legends big man Stephane Lasme I couldn’t help but think of the titular lyric to this song. He’s carved a path featuring a ton of firsts. Lasme is the first pro athlete ever out of Gabon, Africa. And it only begins there.

“I’m the first professional player,” says Lasme. “First NBA, first college Division I player, I’m basically the first everything. It means a lot. It’s kind of a lot of pressure when you go home, but it’s fun. I enjoy it and I look forward to being an example to everyone over there.”

Lasme grew up a great athlete and a very good soccer player. But once he kept on growing…and growing…and growing, he realized his potential in basketball. “Around 15, I got taller real fast during the summer. It was kind of awkward for me to be on the soccer field with all the short guys. People from my country are not usually short –but extremely short– so it was even more awkward. A lot of my cousins were already playing basketball so I just switched over and I liked it right away.”

When setting up his personal hoop, the teenager decided to shake things up. Growing exponentially in both inches and basketball talent, he opted against the standard 10 foot hoop. At his house in Gabon, he assembled a rim 12 feet from the ground. 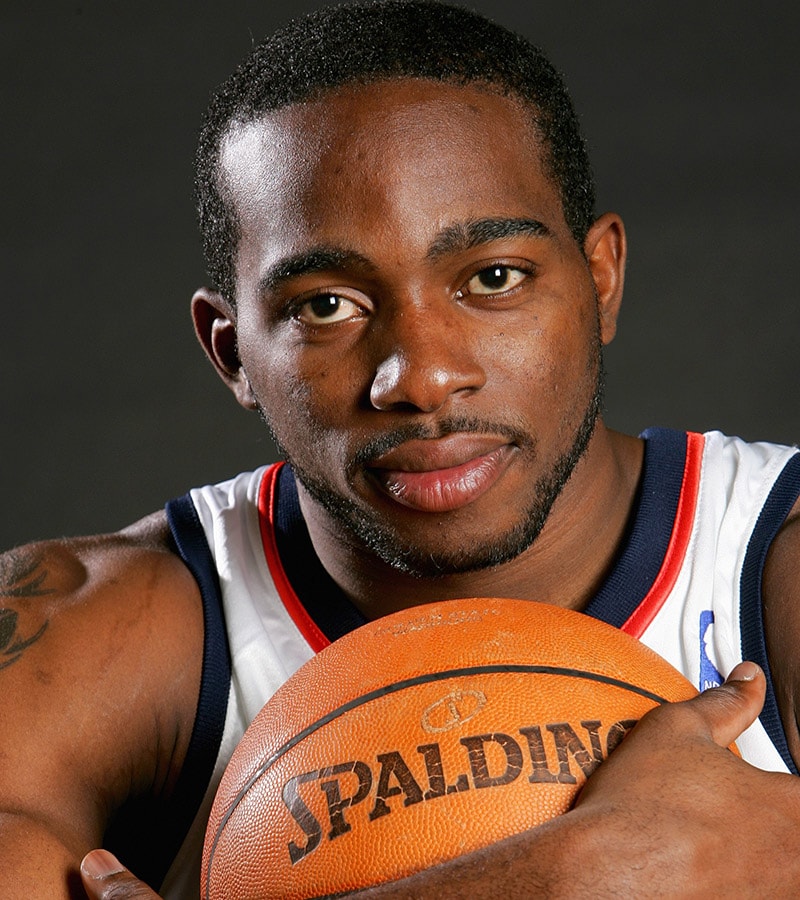 He laughs as he recalls the memory. “Yeah, yeah. I had it very high. I was very big. I think that’s how I worked on my hops and stuff. I was trying to dunk, trying to make all my dunks, trying to shoot. I was just trying to challenge myself to work on my hops. I figured if I put the hoop higher I would get used to jumping higher. It was a special time.”

The practice of jumping higher absolutely became a reality. Lasme looked up to NBA stars like any kid would, but he loved to watch 17-year NBA veteran Marcus Camby, a player he would eventually join in the world’s premier basketball league.

After making his international debut in 2002, Lasme moved to the United States in 2003 and got his bearings at Emmanuel College while living with his cousin in Boston, Massachusetts. With his college basketball eligibility meter full, coaches around the nation started to take note of the African prospect.

Visited by University of Massachusetts Head Coach Steve Lappas, the 21-year old was quickly offered a scholarship to play for the UMass Minutemen. Gabon had its first Division I athlete.

Among many talents he brought to the table, Stephane Lasme became one of the most dominant shot blockers in the entire NCAA. “Blocking shots always came natural to me. It was towards my junior year in college that I kind of figured that I could play defense on different positions, that I could guard guards and bigs. My coach made a big point of me doing that. He used me a lot in college this way.”

Lasme ranked second in the Atlantic 10 Conference in blocked shots his freshman year. His sophomore season he did it again but in his junior season, as he noted, things really took off. By the end of the season he had accumulated 108 blocks, averaging 3.9 per game and finishing third in the entire nation. He ran away with A-10 Defensive Player of the Year.

Senior year came the full explosion. Lasme earned AP All-American Honorable Mention honors, was again named A-10 Defensive Player of the Year and now added A-10 Player of the year to his trophy room. Along with 13.5 rebounds and 9.5 points, he averaged an insane 5.1 blocks per game. At just over five blocks a night, he stands 15th all-time in the NCAA record books.

“It’s a timing thing for me. I just watch the ball the whole time. I’m a guy who’s really big on scouting reports. I watch people’s tendencies before the game and kind of know what different players do. I just time everything. I try to watch the floor, help everybody. I’m big on helping my teammates and just watching the ball. Watching the ball and timing.”

In the 2006-2007 season, Lasme tied an NCAA record with four triple-doubles in a season. However, unlike Jason Kidd (1994) and Michael Anderson (1986) who achieved traditional point-rebound-assist triple-doubles, Lasme did it with his signature blocking skill all four times.

He would enter the 2007 NBA Draft optimistic and after 45 picks, his name was called. Problem was: he wasn’t around to hear it. “I actually was on a plane. The night before the draft I got called by San Antonio for a workout. I went and finished the workout but I got stuck in Dallas. At the airport there was a storm and I got stuck for the whole day. I was waiting, watching the draft on the computer. By the time (the pick) came around we had to get on the plane. In 2007 they didn’t have updating information.”

“When I landed I checked my phone and had a whole bunch of messages. I figured if I had all these messages something happened. I didn’t read the messages. I just called my wife, who was my girlfriend at the time, so she could tell me the news. She told me I got drafted by the Golden State Warriors.” 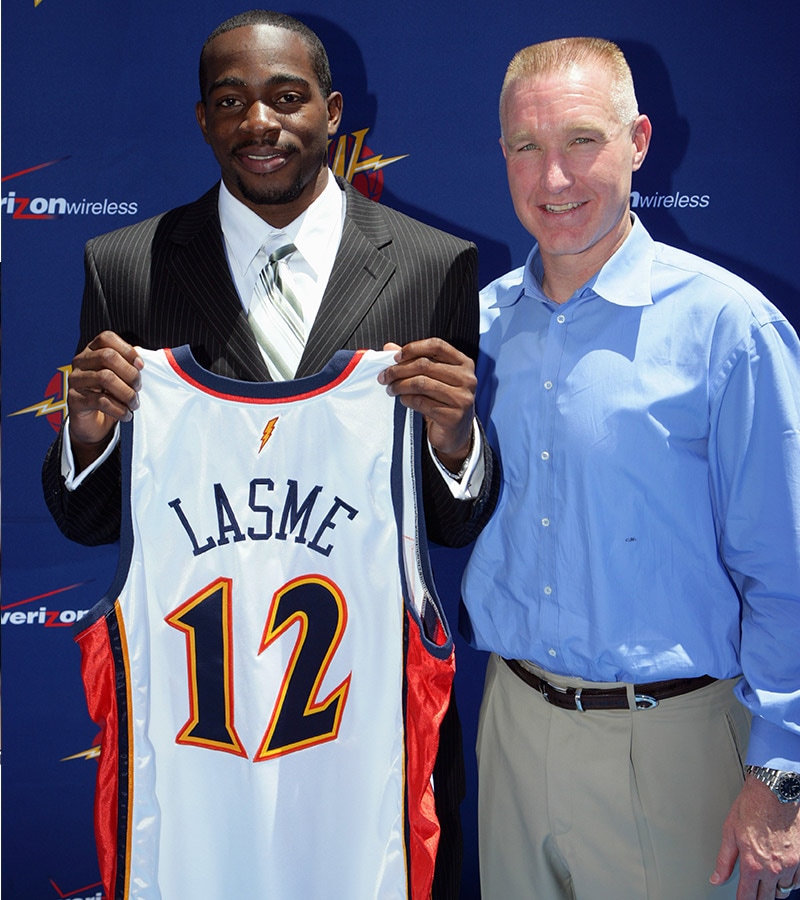 Four years after becoming the first Division I athlete from Gabon, the small country in Africa had its first NBA player.

Lasme made his long awaited NBA debut on November 8, 2007 as the Warriors were defeated by the Dallas Mavericks. His time with the Warriors and the Miami Heat were intercepted by a trip to the NBA D-League with the Los Angeles D-Fenders. He would later rejoin the D-League in 2010 with the Maine Red Claws but from 2008-2016 was largely an international player. And a damn good one.

An injury in 2010 halted Lasme’s progress before he regained his footing (pun intended) in 2012 and became an international star with Panathinaikos Athens of the Greek League. “I broke my foot in 2010 and 2011 I spent the whole year at home. I kind of reflected on what kind of person I wanted to be. I came back in 2011 and played well. Once I got to a high level in the EuroLeague I just wanted to prove to everybody that I was the best at my position. I wanted to prove to everybody that I deserve everything I earn.” 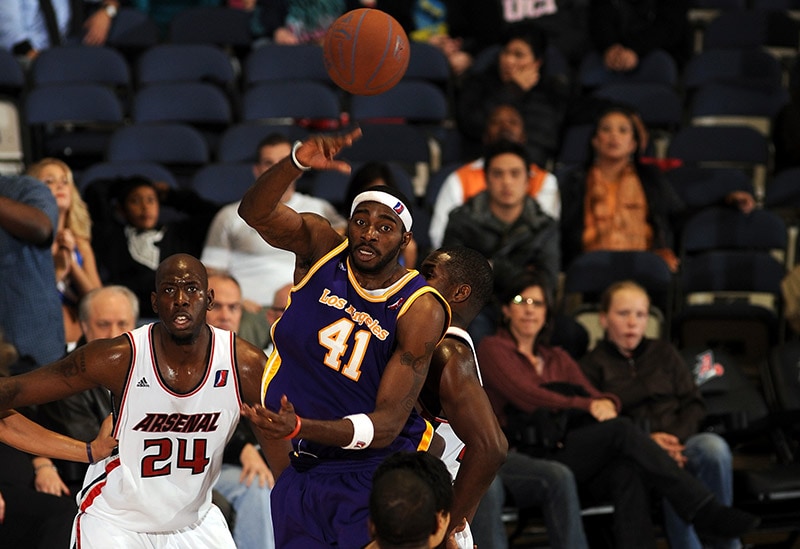 And that he did. He was named the EuroLeague best defender for the 2012-2013 season, recapturing his dominant touch on the defensive end and again becoming a basketball force. He was the Greek Basket League MVP and Best Defender that year as well. Whatever inner contemplation happened during 2011 was providing immense results the following year. 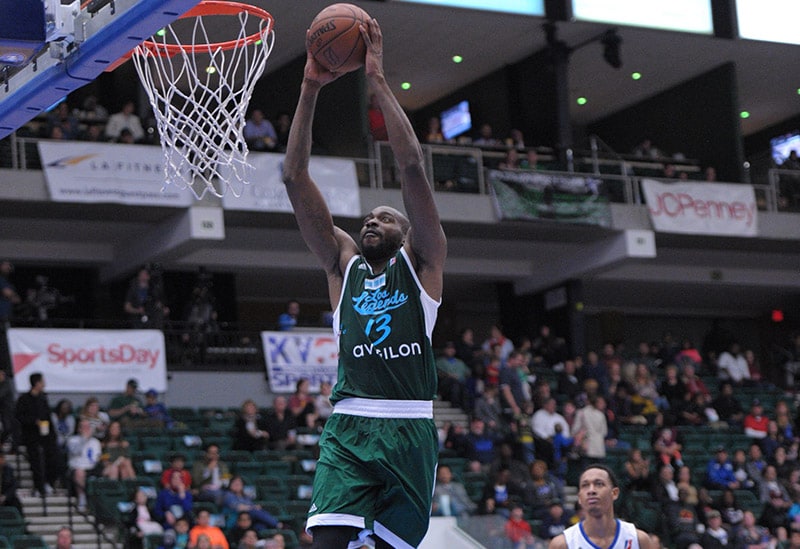 Lasme’s road eventually led back to the NBA D-League on the quest to return to the NBA. On February 10, 2017 he was claimed via waivers by the Texas Legends. Making his debut the next night, the 34-year old played just 30 minutes in his first two games.

“European basketball is really different from here. Over there as a foreigner, I’m not only a foreigner when I play in the states, but I’m a foreigner because I come from Africa. I have to play on a different level because they don’t expect a player from African descent to be that good. I want to prove to everybody that I am that good.”

Unleashed in game number three, he started to prove just that, becoming a starter in Head Coach Bob MacKinnon’s rotation at power forward. In the third game he played, he picked up a breathtaking (but familiar) six blocked shots, pairing them with 10 rebounds.

He’s played seven games with the Mavericks’ affiliate and has recorded the following block numbers in the past five: six, four, three, five and five. These numbers don’t come around often.

“I think every basketball player should know what they’re really good at and make it perfect, and then focus on everything after,” Lasme says. That thing for him is shot blocking, and his NBA return could be coming soon at a rim near you.