The Texas Legends announced today that the 10th annual live draft party, presented by US Census 2020, will be held at Strikz Entertainment in Frisco.  The NBA G League Draft will take place Saturday, October 26th at noon CT. 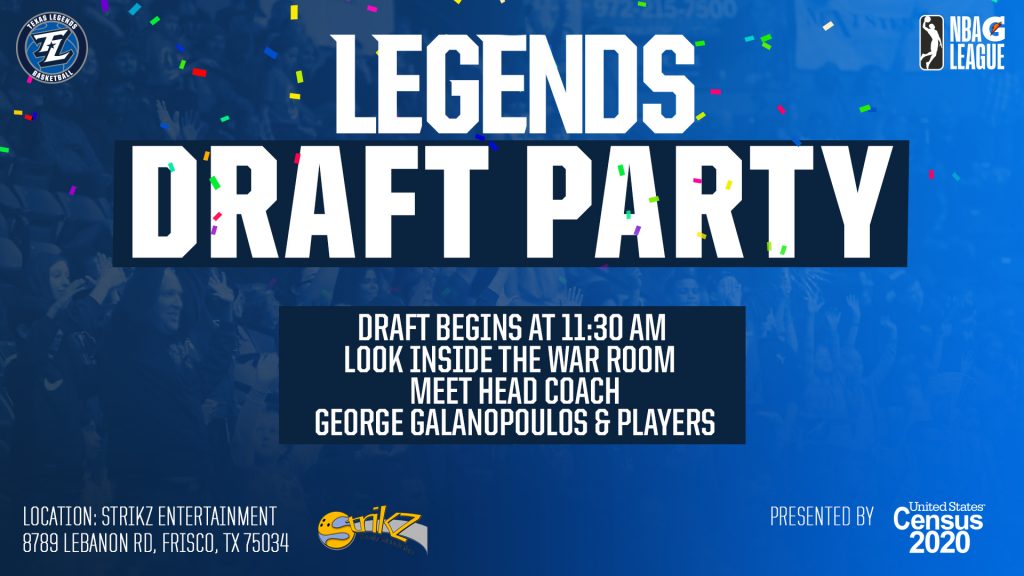 In its fifth consecutive year at Strikz, the draft party will begin at 11:30am.  Legends fans will go behind-the-scenes with first year Head Coach George Galanopoulos and the basketball operations staff as they build the 2019-20 roster.

Strikz is located on the Southwest corner of Preston and Lebanon at 8789 Lebanon Rd in Frisco.  The bowling and entertainment venue will offer food and drink specials, and fans will have the opportunity to meet coaching staff, players, and members of the 2019-20 Spirit Squad.

“The live draft party is one of our favorite traditions with our fans,” said Legends President/General Manager Malcolm Farmer.  “The Legends family gets to come together for a sneak peek at our roster, meet some of the team, and get to know our staff.  They get some insight into the basketball operations that the average fan doesn’t typically get to see.”

The draft party will be the official kickoff for the Legends’ 10th season which opens Nov. 8th with the team on the road against the Memphis Hustle.  The two teams will rematch the following night in Frisco for the home opener at Comerica Center at 7:30pm.  For more information and the full season schedule visit www.TexLegends.com or call 214-469-0822.