Last summer, the Texas Legends named George Galanopoulos the team’s new head coach. Galanopoulos has been a part of the Dallas Mavericks organization since 2015 and has progressed from player development intern to G League assistant coach to assistant video coordinator to eventually being named the sixth head coach of the Legends.

The 31-year-old oversaw a very successful first season, with the team going 24-19 before the coronavirus forced the G League to postpone in March. Despite the early curtain, Galanopoulos says year one was a blast.

“It was incredible. It was a great learning experience. We had a really, really good group of guys,” Galanopoulos said. “The players were great, they gelled really well as a group. They got along, hung out a lot off the court as well which helped the chemistry. We had a great staff, with a diverse skill set throughout that really helped me, personally, transition seamlessly in my first year.”

The rookie head coach had the luxury of an experienced staff, which included former NBA player Eric Snow, who has been with the Legends since 2017. 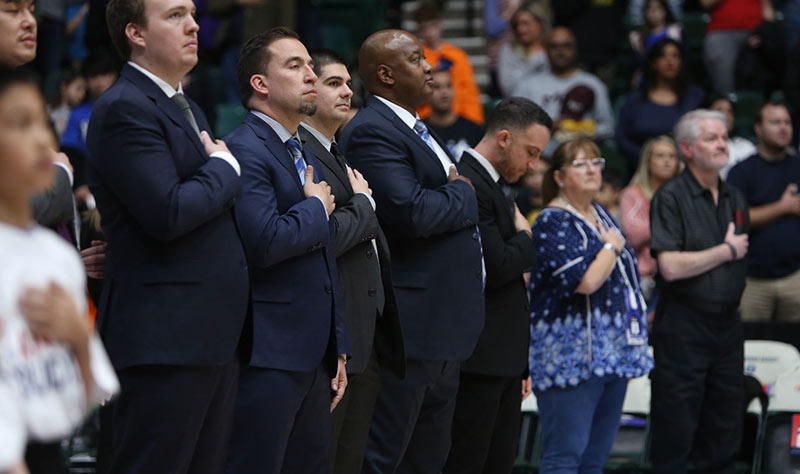 “(Eric’s) background speaks for itself. We had a couple former head coaches on the staff as well which always helps in my first year. We just had a lot of good people in the building and everybody got along. It was a really great group to be around every single day and the byproduct was a winning season.”

Since 2017, Galanopoulos has also coached the Uganda National Team, helping revive that program overseas while doubly pursuing his coaching ventures stateside. It’s literally a different world, but coaching for Uganda helped prepare him for his jump from G League assistant coach to the top of the staff.

“When I coach in Africa, it’s for a few weeks and three games in a row. This is a loaded schedule over a greater span of time and there’s just so many different scenarios that present themselves that you couldn’t even prepare for at times,” Galanopoulos said. “You just got to go through it, it’s experiential learning on the fly. That’s why for me it was really valuable to have some good people around me to help me through that.

“Obviously in-game coaching was not necessarily new to me, but it’s different from FIBA rules. These are actual NBA rules. The timeouts are different, you have more players on the roster, you have a lot more player movement. That’s something in the G League that’s always pretty challenging to navigate through. It was a really good challenge all year long and the people we had in the building, the players and staff, really helped the process along.”

One of the trickiest jobs a G League team has is swapping players day in and day out with the parent club. The Legends take it a step further by often serving as the G League surrogate for the Portland Trail Blazers who currently don’t have an affiliate.

“You could always anticipate that it’s going to happen, but when it happens it always catches you off guard,” Galanopoulos said of the constant G League player movement. “For me, the adjustment was just making sure that I was as prepared as possible for all those different scenarios. 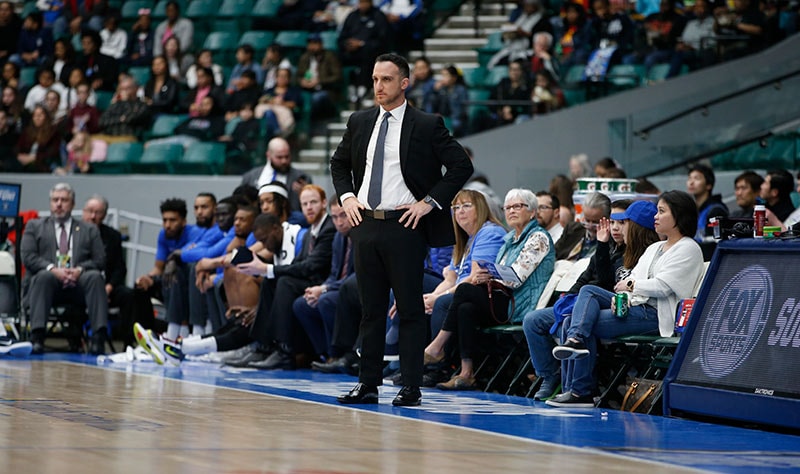 “What would happen if this player got called up, or if this player would go back to Portland or if our guys with the Mavs went back up? Portland had a lot of injuries this year so their guys were going back and forth right after game one of the season. That’s always an interesting situation to navigate, even if you expect it coming at the beginning of the year. It always catches you off guard when it’s actually happening.”

Taking over a new job in any walk of life has its challenges. Fortunately for Galanopoulos, he had four years of experience built up with the Legends and Mavs.

“I think the familiarity was the main benefit. To come into a situation that was new to me in the sense that it was my first year as a head coach in the G League, it was great that there was familiarity with the organization and management. The business operations staff that had been there for a number of years when I was an assistant. The fan base, there are a lot of familiar faces there.”

Before the season was suspended, the Legends found themselves in uncharted territory in the organization’s 10th year. At 24 wins and 19 losses, the Legends faced the possibility of 30 wins for the first time ever. While that hope seems all but lost, the season’s accomplishments are not lost on Galanopoulos and his staff.

“It’s pretty cool, obviously, that the group was able to put together a winning season. The funny part about it is, from day one in our very first meeting as a team, we told these guys, ‘we’re not focused on winning,’” Galanopoulos said the team set their goals in a different way.

“We want to win, we’re out here to win and we’re in this business to compete. We know we’re going to try to win every time we can. There’s no doubt about that. Whether it’s a drill in practice or an upcoming game, we know we want to win. But it wasn’t something that we talked about every day. What we talked about every day was simply how to be better. What we needed to do to be better that day, to put us in a better position both as an individual and as a team. To be successful tomorrow. That’s the approach we took.

“Just hammering away at the details, same thing every day, same approach, we want to be a pro, teach guys how to be professionals and further their careers and increase their value as they move on. All of those things were in play. One thing that we always talked about too as far as establishing a culture was that we wanted to treat each other with respect. Come in, work hard, make sure we treat each other well, and make sure we’re creating a good environment that’s conducive to developing and enjoying it. I think as a group, we enjoyed our time and at the end of the day, the result was 24 and 19. We didn’t come out and say ‘let’s go to the playoffs,’ but it was a byproduct of the work we put in every day.” 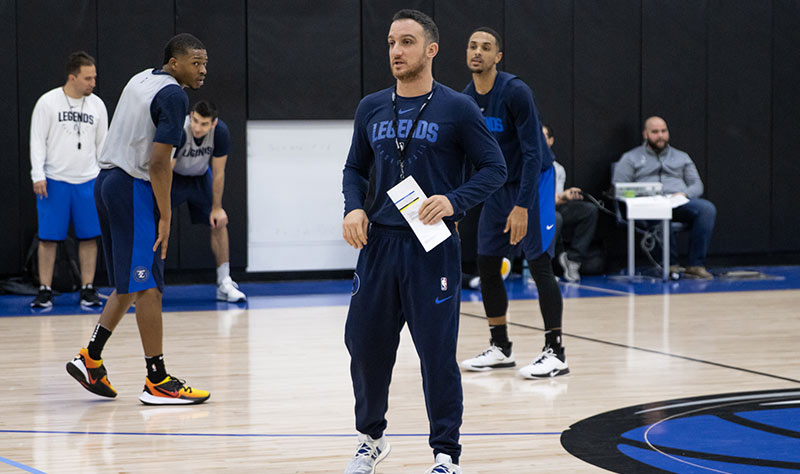 A coach’s best friend, be it season number one or season 20, is film. Galanopoulos says the best tool for learning is watching game film.

Things in the world right now are bigger than basketball and the Legends head coach said he reached out after the G League stopped play to check on each of his players.

With year one under his belt, Galanopoulos has his eyes set on summer workouts and then year two in the fall, but will always hold on to the very unique, very memorable 2019-2020 season.

“I loved it, it was a great experience, and I’m really looking forward to coming back next year.”