When the G League suspended its season on March 12th, the Frisco offices of the Texas Legends closed in line with “Shelter in Place” orders, but that didn’t stop the team’s dedicated staff from pursuing their mission.

While the Legends are known primarily for their namesake basketball team, the backbone of the organization since day one has been the team’s relationship with the community.

“We have long looked at our organization as not having a season. We have a basketball season, but all of the other things we do that surround basketball and in some ways all that the organization is, those are not ‘sometimes’ things. Those are ‘all the time’ things,” said Legends President and General Manager Malcolm Farmer.

“Whether we’re in quarantine or we’re not, those are things we’re going to continue to do. It may mean we have to adapt and pivot our organization in different ways to accomplish that, but it still means that we’re going to do them.”

This past week we teamed up with our partners at @MiDiaFrmScratch, @Raising_Canes, @SubsFrisco & @egsteakfrisco to feed those on the frontlines at @bswhealth and Oxford Grand Assisted Living & Memory Care! 💙#Wereallinthistogether pic.twitter.com/HzJQOsLfFB

With or without basketball, Farmer says the organization’s mission doesn’t change.

“To be bigger than yourself is, I think, all of our calling. To be bigger than ourselves should be everyone’s goal. If we’re going to settle for simply being a basketball team, that’s certainly not in our DNA,” Farmer said.

“Basketball is fun, it’s entertainment, but it also provides us a stage and a platform to go do bigger and better things. It gives us that platform to do things that are more impactful and long-lasting than just our events. That’s what it’s all about.”

Before the COVID-19 virus halted play, it was business as usual for the Legends both on the floor and in the community. When the world stopped, the Legends didn’t. The team still gave away a brand new roof as planned and has only increased their efforts in the local Dallas-Ft. Worth metroplex.

Steve Zeigler, a franchise owner of Jersey Mike’s Subs in Frisco, has played a major role in one of the newest efforts of the team. Zeigler has been a Jersey Mike’s franchisee for 12 years, first opening up in Plano, and has had stores in Frisco since 2011, arriving shortly after the Legends. 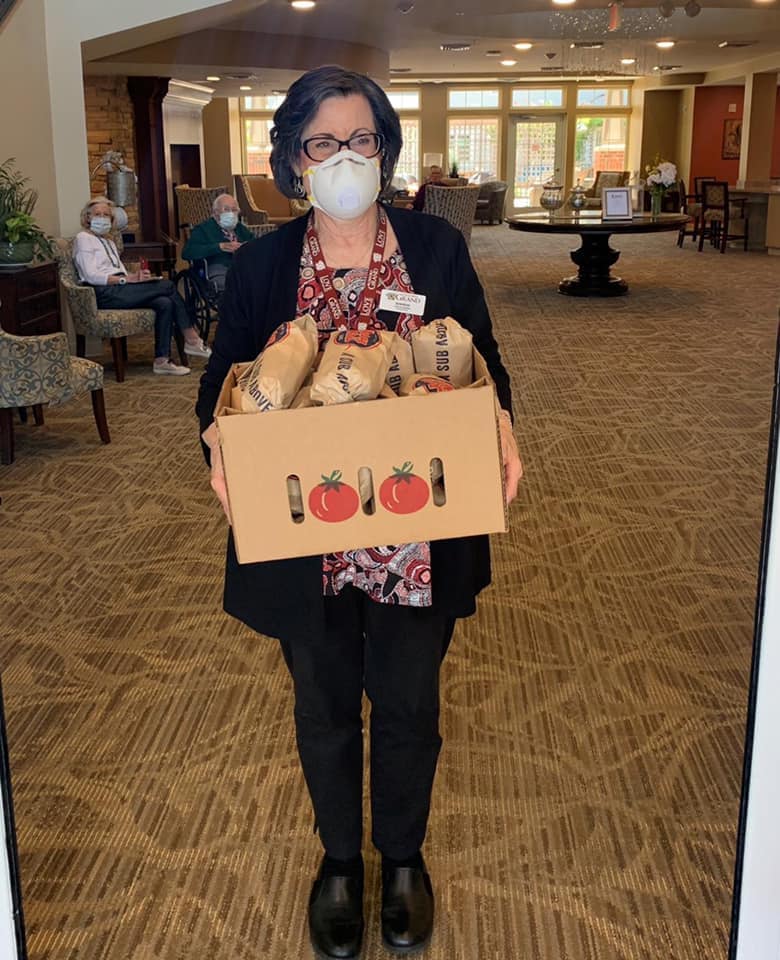 His company has been a sponsor and Legends season ticket holders since the team’s first season.

“Our initial meeting with the Legends included (Owner) Donnie Nelson who provided us with his vision for the franchise. Donnie was all about the customer experience, whether that be at the game or with an everyday interaction,” Zeigler said.

“I will never forget his quote, ‘It will be like a three ring circus and by the way there is a basketball game being played too.’ Our philosophy at Jersey Mike’s is similar in that we want to engage our guests and ensure their sub experience is a sub above. We are more than just a sub shop or a basketball team, we both want to make a difference in your day, week, month, year, and life.”

The newest joint project between the Legends and Jersey Mike’s is the hospital meals partnership, which Zeigler says is in both organization’s DNA to give back to the community. Legends staff came together to provide meals from local restaurants for those on the front lines each night for the past few weeks. Steve’s team jumped on the opportunity, not only partnering with the Legends for the meals but delivering to the various locations to make it an easy “thank you” from the two organizations.

“When we ask, ‘How can we help,’ we really mean it. When this pandemic started to take hold of our community, Malcom and the Legends foresaw the need to support our frontliners who were being overwhelmed and overworked,” Zeigler said.

“We are proud to partner with the Legends to ensure that we keep these folks nourished and healthy during this stressful time. There is no doubt that our partnership with the Legends is mutually gratifying for both of us. We are both authentic, staying true to our roots and being true while always providing the best product on the planet.”

Rich Allen is a Frisco-based business coach and advisor who works with owner-operator business owners to help them grow a profitable business and build a “radically-engaged” team.

He has been partnered with the Legends for nearly 10 years and also provides sales coaching and leadership coaching to the Legends team. Allen’s company, Tour de Profit, is his personal response to any and all company needs for business success.

“Working with the Legends ‘family’ is unlike any other business relationship I have.  Malcolm, Donnie and the entire team have adopted the mindset and philosophy of ‘community first’ and that extends well beyond the basketball court and the front office,” Allen said.

“They truly live it with their partners and community businesses. No other business I know is as involved and engaged with so many non-profit organizations, providing them both support and recognition at a time that they need it the most. The Legends are truly one of a kind and I am proud to be associated with their brand.” Allen joined forces with the Legends when it became clear the small businesses were going to take a toll. Between the two, they put together a business workshop for “Leading Through the Storm” to allow business owners and leaders full access to Allen’s coaching at no cost. This fell right in line with the Legends’ ongoing networking events that were moved to the virtual realm to keep business going as close to “normal” as possible.

A final recent story in the Legends community comes with a heavy heart. A tragedy in the Legends family presented the organization with an opportunity to lend a hand both emotionally and physically. With the permission of the Bohannon family, we share the following story.

Earlier this year, Steve Bohannon, a Legends season ticket holder since the first game of the first season, saw his daughters Allyson and Kate give birth to their first two grandchildren. Caroline and Emmy were born 11 days apart. Katie even attended a Legends game just days before giving birth to Emmy, giving her an exclusive early taste of basketball.

On March 15th, the Bohannons’ world crashed when Allyson suddenly passed away due to a postpartum blood clot in her brain. Steve Bohannon describes their initial joy at the birth of two grandchildren as limitless. He says that limitless feeling turned to sorrow soon after.

As the COVID-19 situation unfolded, the Legends were routinely reaching out to check on the members of their extended family.

“Malcolm happened to text just checking in as the COVID-19 problems were beginning to escalate,” Bohannon said. “Considering Malcolm a friend, I shared the story of Allyson’s death with him. He immediately went into action on our behalf.”

Nothing happens halfway with the Legends and the team started brainstorming ways to figure out how to facilitate their signature community assist.

“Knowing that we had several people staying with us, Malcolm decided the best way to help was to feed us all for a week. He reached out to several restaurant partners: EG Steak, Mi Dia, Round Table Pizza and Rudy’s Bar-B-Q and provided and delivered delicious meals for our extended family,” Bohannon said.

“For Malcolm and the Legends to do this in the middle of trying to figure out what was happening to their own basketball season and the impact on their business is remarkable. We certainly feel like more than long-time season ticket holders. We will never forget the kindness shown to us by the Texas Legends family.”

Bohannon is currently the COO of Lockton Dunning Benefits, the largest employee benefits company in Texas. Steve and his family have known Farmer for years and he calls the Legends President and General Manager “an outstanding executive and partner.”

Current matters take obvious precedence in the Bohannon family and we wish them the best, but Steve makes sure to point out that he and the Legends team have been working on a charitable program together that they hope to complete shortly.

No matter the situation, the Texas Legends organization is not built on basketball. It’s built on family. The basketball part is secondary. Call it a bonus attraction. The Legends mission is to be there for the community and the staff arrives early and stays late to their offices every day finding new ways to accomplish their charitable goals.

“A phrase I’ve been using a lot recently, when folks say ‘hey I appreciate that, you didn’t have to do that,’ or ‘you really caught us by surprise,’ I just say it’s what we do,” Farmer says.