During the 2017-18 NBA season, two-way contracts were introduced and the Dallas Mavericks tried out multiple young players with considerable upside. One of those names was Antonius Cleveland.

Cleveland, who Mavericks fans will remember from his brief stint with the team at the end of 2017 –he played 13 games with the Mavs– has returned to the organization on another two-way contract.

The 6-foot-6, 25-year old played in the Las Vegas NBA Summer League with the Mavericks and impressed club officials in his return to the team that he made his NBA debut with a year and a half ago.

“My goal was to just perform well and get interest from all teams and try to get a deal somewhere,” Cleveland said. “It wasn’t just, ‘let me go in, play well and hopefully the Mavs sign me,’ but more so just let me play to the best of my ability and see what happens.

“I had a couple offers but the Mavs made the most sense. The coaching staff, and having been there before, it was an easy decision.” 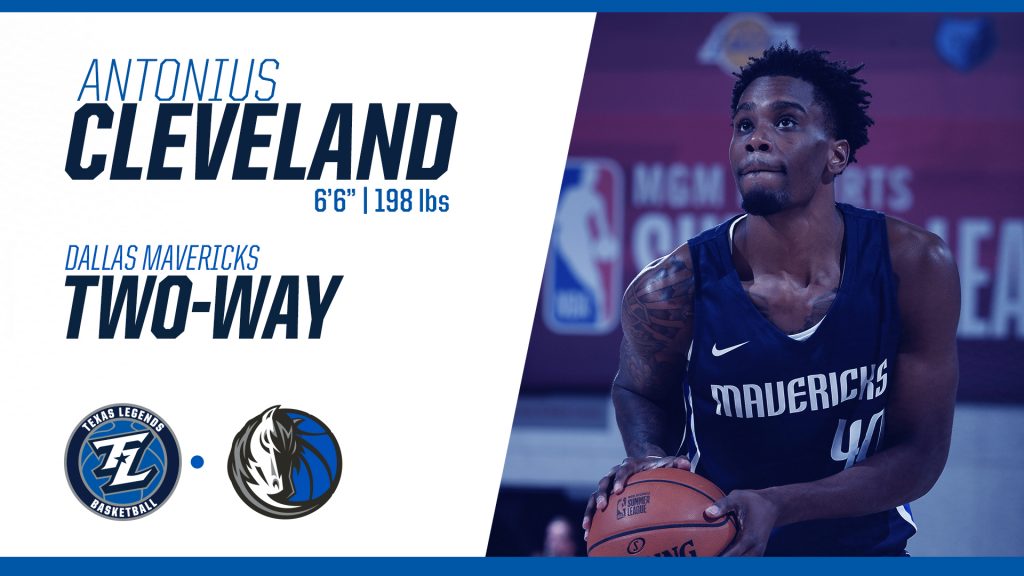 It’s only been 18 months since he was with Dallas, having also spent time with the NBA’s Atlanta Hawks and G League’s Santa Cruz Warriors, but he’s come back a little older and a different player.

“I feel like I’m more locked in now. It’s like your freshman year in college and your junior year. You’re a different player than you were two years ago. I just think everything is better. I feel like I’m stronger, I know more, I’ve been around the block and played a few NBA games. At 23, I was fresh out of college. Obviously a lot has changed on the court and with my mindset.”

The taste of the NBA has left the Memphis, Tennessee native wanting more. He’s reached the top of the basketball world. Now he’ll return with greater ambitions.

Cleveland’s 2017-18 Mavericks stint was cut short by injury. “I was disappointed because I was ready to go the whole season,” he said. “I felt like I was playing good basketball and I’ve just been hungry to get back to the next level. It didn’t work out for me last year, but I just try to control what I can control. I’m extremely excited to get another chance this year.”

He got more than a cup of coffee with Dallas, playing as many as 20 minutes in a game at Golden State. “I was able to help defensively my rookie year and now I feel like my game is better. With improvement this season, I can become an even better player.”

Not long ago, Antonius Cleveland measured in well below six feet tall and as a sophomore played point guard for his high school team. He grew well past six feet by his senior year and he says it changed his entire game.

You hear all the time about athletes hitting notable growth spurts in high school. Anthony Davis of the Los Angeles Lakers grew eight inches when he was just 15. Stuff like this becomes legend and Cleveland keeps that tucked away in the back of his mind. 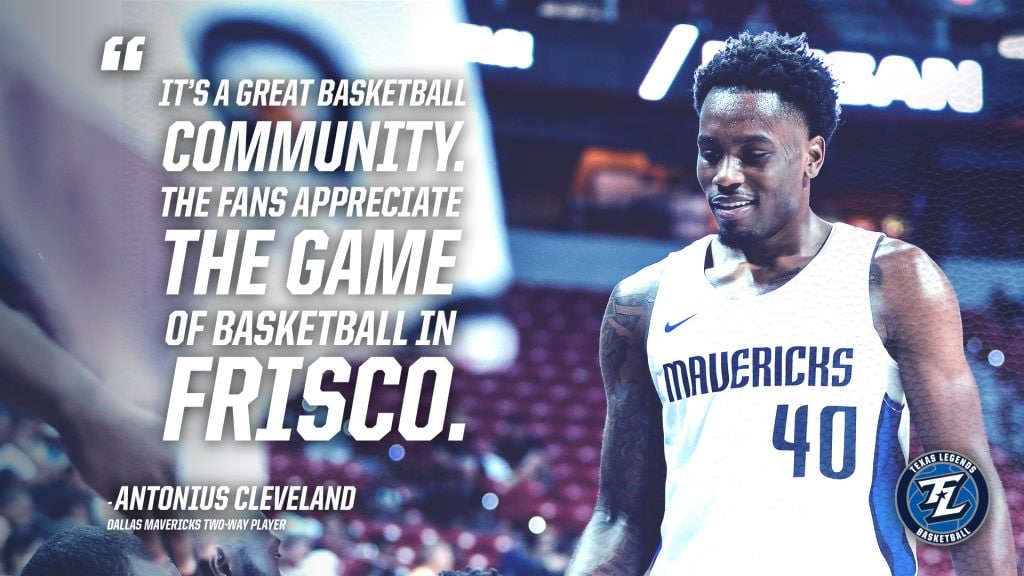 “I feel stories like that happen to NBA players,” Cleveland said.

Even though he was on a Mavericks two-way contract in 2017, the guard/forward played just a single game with the Legends. Most of his Dallas tenure was spent with the big league club. But he remembers Frisco well.

“I remember the fans. It’s a great basketball community. The atmosphere, the sponsorships the Legends have. They got a different jersey every game. I feel like there’s a lot going on with the organization. The fans appreciate the game of basketball in Frisco.”

With sights set on an extended NBA stint, Cleveland has high expectations for himself going into the 2019-20 campaign.

“If I don’t get it, I fall somewhere close. I can still shoot close to 50 from the field, close to 40 from three and close to 90 from the line. Even if I fall short of that goal, my numbers won’t be perfect but that’s what you aim for.”

At the end of the day, Cleveland is one of many players who will get a shot at making an impact on a revised Mavericks roster.

“Really, man, I just want to contribute. I want to make it to where (Mavericks coach) Rick Carlisle and everyone’s like, ‘okay, we need him on the roster. That’s my goal. I want to aim high.”