There’s no doubt about Manny Harris’ capabilities as a professional basketball player. He not only has NBA experience, but was a contributor in his time with both the Cleveland Cavaliers and Los Angeles Lakers. Mr. Basketball of Michigan in high school, he would become an All-Conference player at the University of Michigan.

Since December of 2014, he has been a member of the Texas Legends. This season, he’s elevated his already all-star talent to levels of complete domination. On January 2nd, he added another notch to his belt. The Legends star player was named NBA D-League Performer of the Week for games played Monday, Dec. 26, through Sunday, Jan. 1. During that span, he averaged 38 points, 5 rebounds, 4 assists and 2 steals. He connected on an astounding 57.4 percent of his shot attempts and made 19 of 22 free throws (86 percent).

“It’s another step of showing hard work paying off,” he comments on the honors. “The goal at the end of the day is still to get called up. I was excited for sure, but there’s still more work to do.”

On December 28th, he poured in 47 points on 17-of-28 shooting. He also had five rebounds, tied a season high with five assists and the handsy Harris also added five steals.

A multi-faceted game will soon bring Harris back to the NBA level. “It’s always been there, everywhere I went. Rebounding the ball, getting steals. That part of my game has always been there. Sometimes I’m able to do it at higher levels, but I’ve always been able to get rebounds and steals.”

Manny started the year with a 49-point explosion on opening night. Setting a very high bar, he’s yet to come back down to Earth. He’s collected 21 or more points in all but two games this season, one in which he had a “subpar” 19, according to the standard he’s set for himself.

“Really just working. Working hard,” he says about his continuing excellent play. “At the same time, throughout the season there’s gonna be a lot of roller coasters, so I’m just trying to focus and keep a positive attitude.”

A positive team environment radiates corresponding attitudes. It’s been a contributing factor for Harris in the 2016-2017 season.

“We’ve got a good coach who does a good job of leading us as well. I think overall we just have a good team and organization.”

Coach MacKinnon told me earlier this season that he believes “offensively, (Manny’s) an NBA ready player.”

“I think he’s showing people on defense, too.”

You can never have enough scoring in basketball, evidenced by his former teammate and recent Mavericks call-up Pierre Jackson. Like Jackson, Harris doesn’t just score a ton of points, he does it with efficiency and precision, something that not all prolific scorers in today’s game can lay claim to. 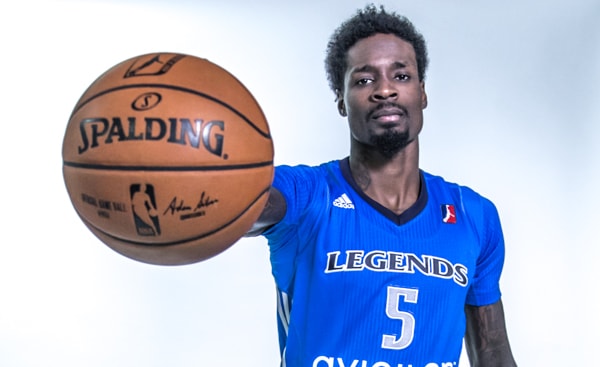 “It’s something that I’m conscious of. You can’t always control whether the ball goes in or out, but it’s just part of trying to stay focused. I do a lot of the little things (like crashing the boards or picking pockets on defense) that help me, it might sound crazy but it helps me on offense.”

Something that helps Manny Harris maintain and advance his dangerous arsenal is a simple fact: he’s a fan of the game. He loves the sport and he loves what he does.

Harris’ dominance in the D-League hasn’t wavered since his 49-point season debut on November 12th. It’s not a matter of ‘if’ but ‘when’ for his next trip to the NBA and with 10-day contracts right around the corner, it will probably be very soon.