The Texas Legends traveled to Southaven for the first matchup of their tenth season.  After a combined 47 turnovers, Memphis took the opener 105-95.

Dakota Mathias opened the scoring with a long three to give Texas the first lead, but Memphis caught up quickly and hit a 10-2 run to finish the first quarter up 14.  Texas got hot in the second, streaking through 11 straight to make it a five point game, but back-to-back threes from Josh Jackson and Dusty Hannahs sent Memphis to the locker with an 11-point cushion.  After two, the teams combined for 29 turnovers with the home team forcing 15.

The Hustle pulled away in the third behind an 11-point performance from Matt Mooney, taking their largest lead of the night +21 while forcing nine more turnovers to their allowed three.  The Legends had cut the difference to 15 going into the fourth and started the final quarter with six straight points to make it a single-digit deficit.  With an open ending, the two teams exchanged baskets, and the Legends found themselves within seven at the three-minute mark.  The Legends powered out seven points in the final minutes but couldn’t hold Hannahs, who had all seven of his fourth-quarter points in the last three minutes to boost Memphis to the win. 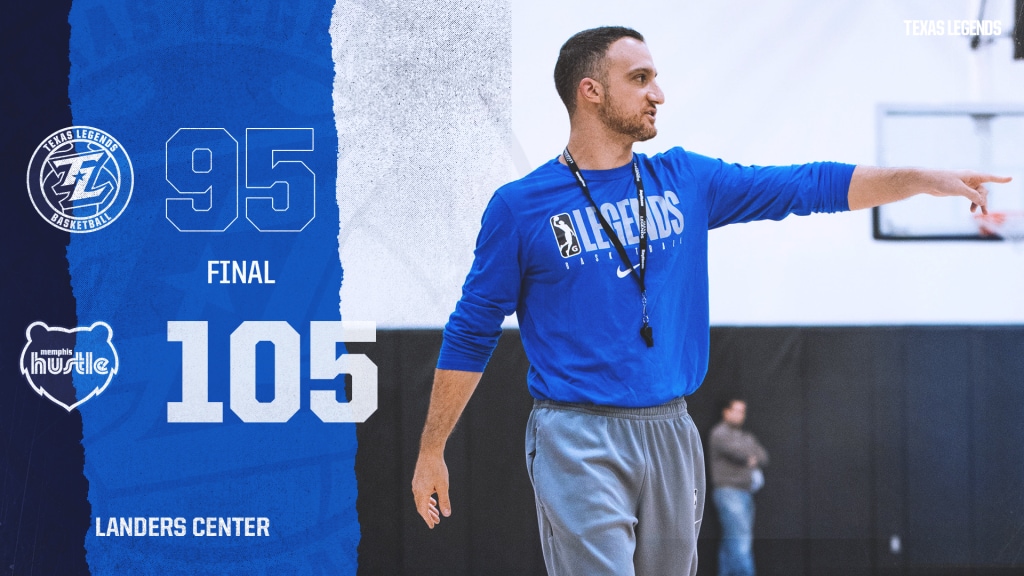 The Legends finished strong with a 30-point effort in the fourth and finished with six players in double-digits.  Mathias led the charge with 19 while Isaiah Roby grabbed the game’s only double-double of 10 points, 10 rebounds.  Josh Reaves tallied 13 points, 5 rebounds, and a team-high 5 assists, and Jaylen Hoard completed 7-of-13 from the field for 14 points, 9 rebounds.  Mathias, Roby and Moses Brown blocked 2 shots each.

Memphis was led by Jarrod Uthoff with 23 points, 8 rebounds while Yuta Watanabe had a game-high 12 rebounds with 7 points, 2 steals.  Hannahs and Josh Jackson finished with 19 and 18 respectively and Jackson dished out a team-high 5 assists.

The two teams will travel to Frisco for a rematch tomorrow at 7:30pm CT.  For tickets or broadcast information call 214-469-0822 or visit www.TexLegends.com.