If you’re on social media (I’m optimistic), you may have recently scrolled by news of a former NBA All-Star. Well, as it turns out, Nick Van Exel recently made quite the discovery.

Iced coffee. TMZ had the scoop. It’s even on his Wikipedia page.

Known for years in the NBA for his high socks, polished dome and unique free throw shooting routine, Van Exel has transitioned from an accomplished basketball playing career to the coaching ranks. We always ponder our next life, and Van Exel actually started thinking about his post-playing days after a trade.

“When I got traded from the Mavericks (to Golden State in 2003), that’s when I really started thinking about coaching.” Van Exel said. “I always said I would try to retire and give myself two years and then get back into the game, but unfortunately, it took a little bit longer than that.”

After “Nick the Quick” retired his 13-year NBA career in 2006, he took his first coaching job in 2009 at the recommendation of an old friend.

Dining in a Houston restaurant with Texas Southern University coach Tony Harvey, he was offered a spot on the Tigers staff.

“I would always see Tony in Houston and he would always say ‘come on over.’ So, I did, and we started talking and I thought this would be a good start. This could show people that I could coach and my dedication to do things at Texas Southern like the 14-hour bus drives. So I decided to start that route.”

Van Exel spent a year as an assistant for Harvey, and then the NBA came calling. His first job back in the league came through another friendly face, and his own willingness to simply ask the question.

“Larry Drew was my assistant coach when I first came into the NBA and we’ve been good friends ever since then,” Van Exel said. “I called him and congratulated him on getting announced as head coach of the Hawks and I just asked if he had anybody working out the guards. He did, but that fell through and I was the next call.” Things fell through and a coaching career took off. Van Exel spent two seasons with Atlanta as an assistant coach before taking the same position with the Milwaukee Bucks, his hometown team. Born in Kenosha, Wisconsin, the homecoming lasted the 2013-2014 season. Another homecoming awaited.

Van Exel, who played with the Mavericks in the 2002-2003 season, had previously gotten acquainted with the Dallas-Ft. Worth metroplex. Prior to his standout days at the University of Cincinnati for the Bearcats, he attended Trinity Valley Community College, who former NBA star Shawn Kemp also called home for a time.

Located in Athens, Texas, an hour’s drive southeast of Dallas, Van Exel turned Dallas into his new home. He spent just one season as a Maverick, but it was quite the season indeed.

For just the second time in franchise history, the Mavericks reached the Western Conference Finals. Under coach Don Nelson, the Mavericks took the league by storm with the “Nellie Ball” offense. Basically, Nelson forfeited the center and a traditional lineup, going small and relying on his guards, like Van Exel, who fondly recalls his memorable Mavs days.

Van Exel scored 36 points in Game 2 of the Conference Semifinals against the Sacramento Kings, and dropped 40 in Game 3.

“We felt we had a good shot getting to the Finals. We were kind of a young and up-and-coming team. We did things on the court that a lot of teams weren’t doing at the time. The way we played the game. I think we changed the game a little bit with our style of play. Those were good times, man. I just wish we could have gotten to the Finals and won. But it was still a great time.” 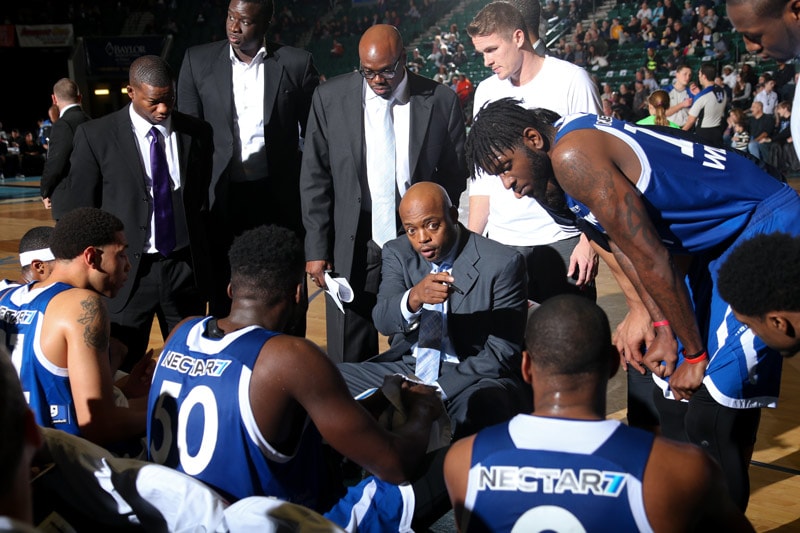 Familiar with Dallas, the Mavericks, and now a permanent resident, the rising coach proved a perfect match with the Texas Legends.

“I lived in the Frisco area, so I wanted to stay involved and stay active and keep my face out there. The Legends gave me an opportunity to do that. I was living in Frisco so it was a perfect fit. I got to work under (Eduardo) Najera for a year, a former teammate of mine, so we got along great.”

Van Exel spent a season as a Legends assistant in 2014-2015, then the following year, he took over for Najera to become the franchise’s fourth head coach.

“I got an opportunity to be the head coach, which was great for me because I had to get that experience of being a head coach and running my own team, practices, and things like that. Things worked out perfectly in those two years.”

Five years as an assistant at three levels was icing on a cake that was already baked. Van Exel was ready to be a head coach.

“For me, being a point guard, I think we’re natural leaders because we do so much leading on the court. We’re the head coach’s voice and, most of the time, if you’re a point guard, you know what your coach is thinking. Who to get the ball to or a certain type of play to run. So for me, it was very easy. It was just a matter of getting practices together, the game plans, the practice plans and things like that. As far as the X’s and O’s, that came pretty naturally.”

The next step for Van Exel was back in the NBA as an assistant coach for the Memphis Grizzlies. The Grizzlies got their own G League team, the Hustle, in 2017, making Van Exel an organic, in-house consultant who saw the benefits of the G League.

“When I came to the G League from Milwaukee and Atlanta, I saw the G League as like Triple-A in baseball. You want to get the guy on the court to stay, not go overseas. I just saw some things that NBA teams and NBA owners could really benefit from having with a G League team. I used to give my input sometimes to the Memphis people (after they got the Hustle). I was just trying to give input on what I saw and what I felt could help the Hustle be successful.”

Van Exel left his mark on Legends history, and his experience in Frisco helped shape the natural leader’s future. Grab your iced coffee and stay tuned as the Legend of Quick Nick continues.