A decade ago in 2010, when the Texas Legends first poofed into existence, one of the first tasks Donnie Nelson and company had was to fill out the roster. One of the names that quickly resonated with Legends brass was recently retired, 12-year NBA veteran Antonio Daniels.

All the name changes seem to age the 44-year old, though he looks as if he could still play for over half the NBA.

Still being able to play is what brought Daniels, known to many as just “AD,” out of initial retirement in 2010. His opportunity and road back to the NBA came through this brand new idea called the Texas Legends.

“It was humbling for me, very humbling after playing 12 NBA years,” Daniels said. “But I don’t think there was a better situation that I could have stepped into as far as the D-League was concerned at the time. A top brass organization, great people from Donnie to Malcolm (Farmer) to Nancy (Lieberman). Fantastic people. It was just a good group of guys. I honestly feel wherever you play is for a reason we may not understand, but it was a great opportunity for me to learn a lot and to mentor some younger players in the process.”

Questions about whether he could still play ball were answered quickly. With the Legends in the 2010-2011 season, Daniels averaged 14.4 points and was fifth in the D-League at 8.5 assists per game.

“When I retired I was like, okay, I’m done. I had retired after 12 seasons and thought I was finished. Then I thought, maybe I have something left. Going back, it’s humbling. You’re used to flying private, chartering everywhere, staying at the Four Seasons and Ritz Carlton’s, you know, top notch hotels and this was different. This was different. But being with the Legends, that made it a lot easier. They did anything and everything they could to make it as close to an NBA environment as possible.”

The D-League has come a long way in all ways of life since then. Three teams Daniels played for in his NBA career have changed monikers. So has the D-League, which is of course now the G League.

He recalls how the Legends treated things like an NBA organization from day one. With backers like Nelson, Hall of Fame coach Del Harris, NBA star and Dallas native Spud Webb, and WNBA legend Lieberman, the first women’s coach of a men’s professional basketball team, Daniels came back to a situation perfectly suited for him. 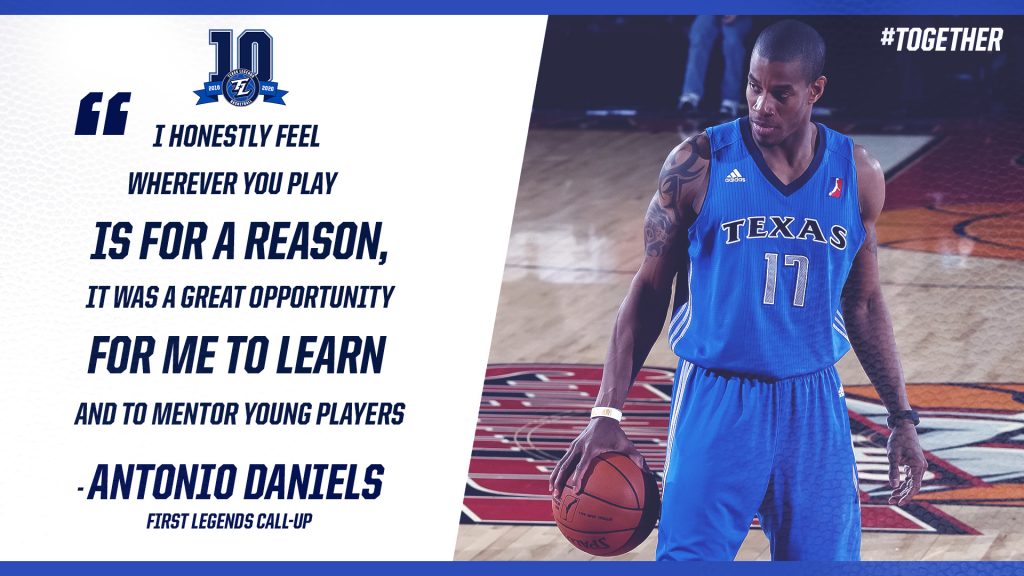 Daniels helped lead the Legends to the playoffs in their very first season after relocating from Colorado. Shortly after clinching their playoff berth, Daniels entered the Legends history books again with the franchise’s first NBA Call-Up.

“When I got called up, it was bittersweet because we had just made the D-League Playoffs. We had beaten Austin, in Austin, and came back that night to Dallas. The next morning I found out that I had gotten called up, so I wouldn’t have been able to join the guys in the playoffs, and I had really fought a lot that year to get to that point (with them.)”

In spite of an untimely injury, Daniels saw action in all four games during his 10-day, including game 1 of the opening round of playoffs that the Sixers took over Brooklyn 4-1. More importantly, Daniels got what he came back for: an NBA call-up.

A decorated career for a college star for hometown Bowling Green, a top five draft pick and an NBA champion, Daniels reflects on his learning experience in the D-League/G League.

“The thing about the G League that I enjoyed was the competitive nature. These are guys that are trying to get where I had been already. When you play against college guys, they play harder than anybody else. NBA players understand how to play without using too much energy. College guys play really hard. And G League guys play really hard because they’re playing for their livelihood. They’re trying to get called up and fulfill their dream.”

The league has gone from a prospective NBA minor league with 16 teams, to a viable farm system, to the second-best basketball circuit on the planet at 28 teams as it enters year 19 this fall.

“Some of the guys that I had an opportunity to play against and see play, like Jeremy Lin, Avery Bradley and Hassan Whiteside, these guys have come through that G League pipeline and have made a career out of playing extremely hard and being talented. Sometimes it just takes being at the right place at the right time and somebody seeing you. There are some guys in the G League that can really play. It’s only a matter of time before that NBA roster is a part of their future moving forward.”

Nowadays, you can find Daniels, well, pretty easily if you’re a basketball fan. I assume you are. AD is a full-time studio analyst for the Oklahoma City Thunder and also contributes to broadcasts for the Dallas Mavericks and New Orleans Pelicans. Three organizations of eight that he was a part of in his career.

He also co-hosts a basketball show on Sirius XM NBA Radio multiple days a week. He stepped into the Thunder TV job at the recommendation of his old Legends coach Lieberman, who left the position with OKC to take an assistant coaching job with the Sacramento Kings.

The first ever Texas Legends call-up is a resounding success both on and off the court, and both before, during and after his time with the organization. His legacy extends way beyond the 94 by 50 feet court dimensions and his name is firmly entrenched in Legends history.