What do you get when you combine courtside seats, the right place, a marker board, the right time, and a free car? You get Terry Halterman, Texas Legends “Superfan.”

Born in Ohio, Halterman moved to Michigan and then became a Texan in 1980. He attended high school in Houston but has been a Dallas-Ft. Worth regular since 1985.

While having lunch in Frisco in 2010, Halterman took notice of a gentlemen walking around with a microphone and sharing information about something called the Texas Legends. 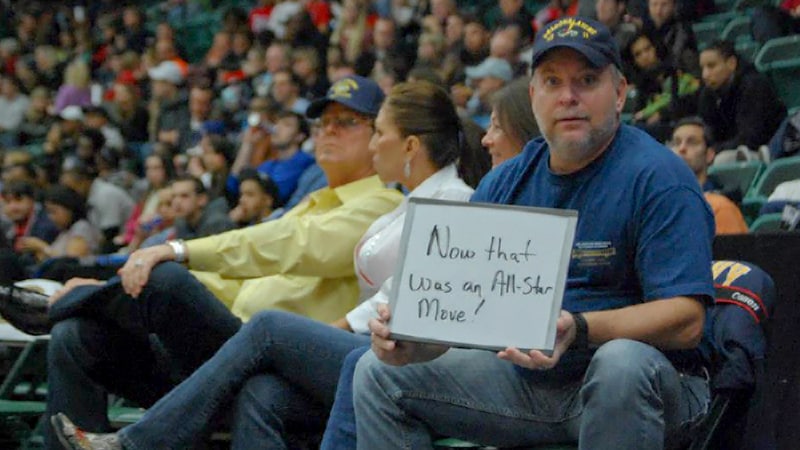 “I didn’t know anything at all about the Legends,” Halterman said. “(Former Legends President) Bill Boyce was there selling tickets for this new team that was going to play at the StarCenter. They were talking about who they were, the association with the Mavericks and all kinds of stuff. And it was cheap. They were running a promotion so I got tickets. I kind of signed up on a whim, bought some cheap seats and it started there.”

The benefits came in almost immediately for Halterman, who was taken aback by the inside access the organization showed right off the bat.

“They invited the people who signed up for season tickets to see the new floor and see where your seats would be. As a matter of fact, (Basketball Hall of Famer and the first Legends head coach) Nancy Lieberman was there signing books with (team co-owner) Donnie Nelson. You got to come over, meet people, and that was the first point where I said, hey, this is great, I just met Nancy Lieberman! I’m out there hanging out with her, asking questions, taking pictures, and that’s when you realize as a season ticket holder they treated you really special.”

Halterman enjoyed seats five rows behind the Legends bench in his first two years as a season ticket holder. He jokes that he was talked into upgrading by the ticket reps, but there’s no competing with affordable courtside seats right next to the visitor’s bench.

“It was season three when I moved into those seats. I’m sitting there and I realize I’ve got this great opportunity where I can kind of distract the other team. I was trying to figure out how I could take advantage of these great seats. The other thing is you’re on TV every time there’s a timeout. I had a small marker board at home and I brought it to one of the games. I got a chuckle from the team and the fans behind us thought it was funny. I was like, okay, this could be my gig.”

It all came together quickly during the 2012 season. That was the year the Legends started giving away a car. Halterman would tell those he saw on game day that he was going to find a way to win that car.

“Whatever you say, Terry,” they probably replied.

“I thought all along I could win that car,” Halterman says now.

With photos of his mother and grandmother in hand for good luck, the correct key that turned the ignition to a brand new set of wheels belonged to Halterman.

“When I won, I thought, I have these great seats, a car that says Legends all over it that looks like a basketball, I’m now the “Superfan!” “It goes back to that very first impression I had when I got introduced to Nancy and got to see things before other people did. When the Mavericks won the championship, Donnie gave us an opportunity to see the trophy. He gave us a chance to try on his championship ring. We get to see Spud Webb and Del Harris and all of the famous basketball people.”

Halterman even spent a weekend at Nelson’s lakehouse and is a frequent flier (or bus rider) on the “Love Those Legends” road trips.

“Getting close to those people, those opportunities and those types of things, traveling with the team to San Antonio, Houston or Oklahoma City. We’ve had opportunities to do things as season ticket holders that most people don’t ever get to do.” 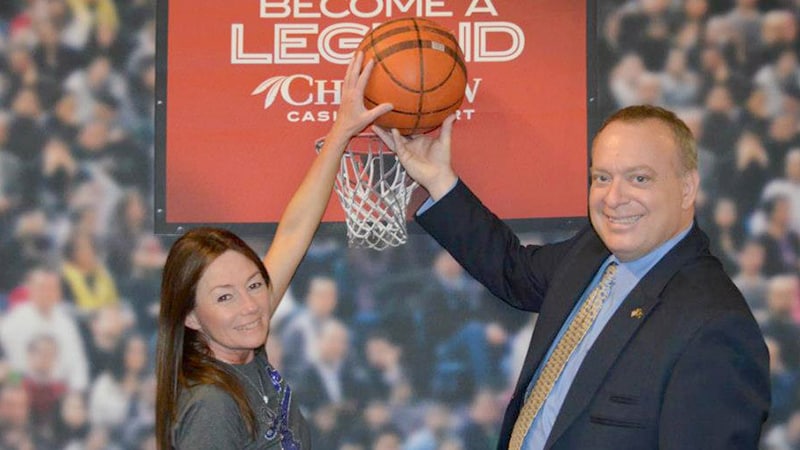 Halterman is clearly a big basketball fan, but what the organization does off the court makes him incredibly proud to be a season ticket holder.

“I love how much they do for charity and the community. The opportunities and the things they provide to season ticket holders to see, to do and to participate in, those are the things that set them apart and that’s the reason I’m still here. I get to do things I otherwise never would have been able to do.”

Season ticket holder life has been good to Terry Halterman. But there is one thing he would like to add to his decorated Texas Legends collection.

“I renew and I continue to renew every year. Now I just need to win another car!”

Whatever you say, Terry.